Ever since their release at the head of George Sound in March 1905, nothing has aroused hunters’ passion more than the greatest of all the deer species, the magnificent Wapiti.

What is a Fiordland Wapiti Deer?

Simple, it’s an Elk. Elk are a North American species of deer, second only to the moose in size.

The name Wapiti is Native American in origin, meaning “White”. The name refers to the pale rump and tail of the American elk. There are four recognised subspecies in North America, and another four in Asia, though variations between species are slight and DNA evidence suggests there may only truly be four subspecies. 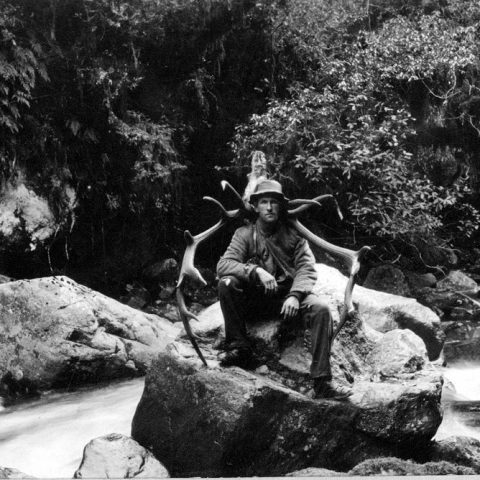 The Origin of the Fiordland Waipit Herd

Discover the history of the New Zealand Wapiti Herd 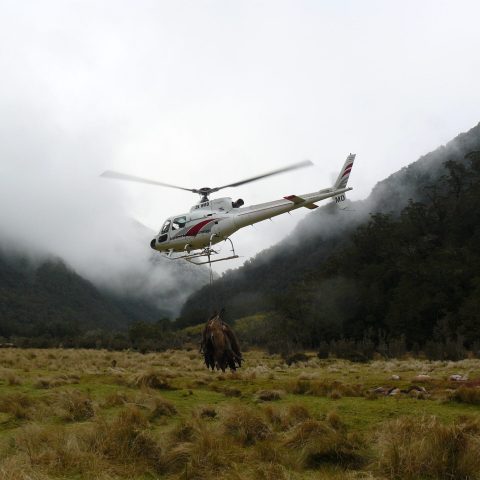 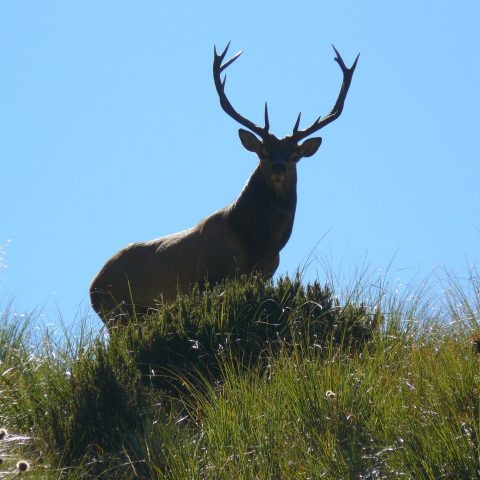 Apply for the Ballot

Did You know?
The biggest threat to the Wapiti herd is young bulls being harvested before maturity.

Wapiti, or North American Elk, were introduced to New Zealand from their native North America in 1905, when 18 animals of the Cervus elaphus nelsoni (now called Cervus canadensis nelsoni) species were released at the head of George Sound, Fiordland and became quickly established.

Ten of these animals were a gift from American President Theodore Roosevelt, the balance were purchased by the New Zealand government. Earlier introductions to other sites in New Zealand were unsuccessful.

In 1923 the first hunting licences were issued and as interest grew and the herd spread, more blocks were made available. By the 1950’s demand was so great that the blocks were opened to a ballot system. Today there are 25 blocks that attract hundreds of applicants each year.

Wapiti are the largest deer in New Zealand (accepting that moose are no longer present in Fiordland). The male carries spectacularly large antlers that are round in cross-section.

The current ‘Wapiti’ population in Fiordland is a hybrid between Wapiti (Cervus canadensis) and Red deer (Cervus elaphus) though physical appearance can vary from individual to individual.

Wapiti antlers grow more up, out and backward whereas those of Red deer tend to grow up and inward; and Wapiti antlers tend to have fewer points than Red deer.

Wapiti tend to have a calmer temperament compared to Red deer.

In winter, Wapiti are coloured yellowish to brownish grey with an almost black underbelly and dark chestnut brown head, neck and legs. Their winter fur is long and mature animals can have a neck mane.

During summer, the body coat is shorter and more tawny, reddish or light bay in colour, and the legs dark. The rump patch is large, uniformly cream and bordered with dark brown year-round.

New-born calves are tawny brown and some have a dark stripe along their spine. The rump patch on Wapiti calves is yellowish brown and they have yellow/white spots like young Red deer, though less distinct. The spots disappear at about two months of age.

Wapiti have a blackish, hairless muzzle and large ears about half the length of the head, sticking out at an angle from the head.

The large bone antlers are cast (thrown off) annually by bulls only. New antlers and the soft velvety covering, known as ‘velvet’, start to grow from approximately mid-August and growth is completed between late-January and mid-March.

Males rub the fully grown, hardened, antlers on trees and other objects to get rid of the dried velvet. Antler size develops with age and can be affected by nutrition: one-year-old males usually have a pair of unbranched spikes (tines); two-year-olds have four or eight tines; and mature males usually have at least 10 or 12 tines, rarely exceeding 16, and the pair of antlers can weigh up to 18kg.

Learn how to evaluate Wapiti bulls.

Wapiti are social animals that feed in the early morning and late evening. Like many ruminants they are inactive during the night and the middle of the day, when they mostly chew their cud (food regurgitated for a second chew). Wapiti behaviour and habitat use is similar to Red deer and the two species mix and cross-breed freely. During spring, Wapiti move out of the forest to more open sites to feed on new grass and shrub growth.

Breeding, known as the rut, occurs between mid-March and the end of April. During this time, males try to collect a group of females (known as a harem) and will defend them vigorously from other males. They will vocalise loudly (see video to hear what a bugle sounds like, a high-pitched, spine tingling sound when echoing off Fiordland’s glacial walls), spar with their antlers, and sometimes actively fight – which can cause serious injury. During this time both sexes are banded together, with a dominant bull corralling numerous cows and younger ‘satellite’ bulls hanging around the outside, occasionally challenging the master bull.

In spring, the two sexes separate; the females to give birth and the males to form their own separate bands, in the North American landscape the female groups can be 400 strong. In Yellowstone National Park this can trigger migrations up to 270 kilometres in length, but in Fiordland they are more typically catchment-to-catchment as the numbers are kept lower by the efforts of the Fiordland Wapiti Foundation.

Calves are usually born from late November to mid December, usually as single calves but rarely as twins. For the first few days after birth the calves remain hidden but they begin following the mother around after about two weeks. They are mobile by two weeks old and fully weaned after two months.

Males (bulls) can be up to 1.5m tall at the shoulder and females (cows) up to 1.3m. Overseas, bull Wapiti can weigh up to 450kg, but New Zealand’s free-ranging Wapiti are generally smaller, weighing up to 260kg. 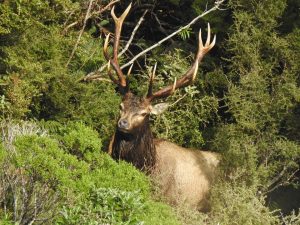